So the reason rally is over a year past… but people are still talking about it… and I know I am still thinking about it. Unfortunately Rich was not able to go, mostly because we were not together yet…  but I was there and the experience was more than I could have ever asked for…then I came home to the reality that I am the outcast and no one really sees past the word “atheist”.

First the good stuff. I love that it rained! The progression of women’s hair styles and yet still smiling faces in photos adds an extra kick- and it gave the speakers something to laugh about. I spent some time offering up an “atheist approved” banana to the protesters (ray comfort, get it?) and it took a long time to get one to accept it… but I can be persuasive and when I want something done, I complete the task at hand…even if i needed a little help from Jesus. Another fun part was having a ton of photos taken of me and my friends holding a sign that read “atheism, it’s like being gay in the 80’s” … was great to see people appreciate the humor…but then I got home.

After bathing in Atheist love all weekend I was ready to tell the world of my great time… and as it turned the world did not much care for it. One instance in particular occurred on a message board for fans of the TMNT franchise, and since that was the field of sales I was in I frequented it and in between business chatted it up with my friends and fellow members. I started a thread in the “current events” section titled “Reason Rally 2012” and just stated it was fun and wanted to know if anyone else from the forum was there… it was locked almost immediately… and nothing negative had even happened… click the images below if you want to see for yourself (names have been blocked to protect the ignorant). 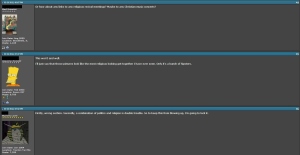 So why was I singled out? The current events section had hot topics all of the time- but this, a peaceful event to celebrate our community was flagged as wrong before it even had a chance to speak. You might say I was in the wrong place, but these people discuss life issues and “pray” for each other, they discuss what’s in the news, it was perfectly fine to  make a thread when Pope Benedict the XVI resigned… heck- there is even a thread discussing what religions they believe the ninja turtle characters might have.  So it isn’t that religion is off limits, it is that no matter what community you happen to be a part of,  you will face people who don’t have enough Genesis to counter your scientific reasoning and so they will shut you down out of fear. This particular experience didn’t break my spirit, but it did remind me where we stand in an apologetic’s world… luckily some of us stand tall.