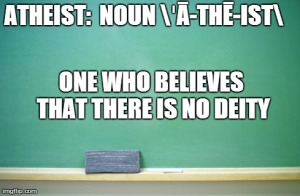 When it comes to living an openly secular lifestyle I am often confronted with questions that start out with “Does an Atheist…” or “Do Atheists…”. Of course I have no problem answering any questions that are thrown out to me, but whenever they are prefaced with this type of generalization I make sure that one thing is clear… I cannot speak for all Atheists, I can only speak for myself.  Somehow this is frequently met with a bit of confusion, as more and more people are lumping Atheism with religion. People assume that, just like religions have rules that you (are supposed to) live by that Atheists do as well but this is not so. The only thing that all Atheists have in common is a concrete stance that their is no deity directing their life. After that it is up to the individual to decide what type of life they want to live.

I know a lot of times people believe that being an Atheist automatically makes you an Anti-theist, this is incorrect. Personally, I have no desire whatsoever to abolish religion. I do not want to take away the rights of anyone to be able to practice as they wish and I am not trying to create a completely secular world. My non-belief is not strengthened just because I can force it onto others and so I am not in favor of doing so. Simply keep it out of my public policy and this Atheist will gladly let you go on your way.

Another one that I encounter on a regular basis is that all Atheists are Humanists… again, this is incorrect. I would never pretend that all non-believers are living with humanistic values in place. I am in fact a Humanist, our household is run with a Secular-Humanist system of reasoning and respect. The “golden rule” approach in respect for how to treat others is encouraged by both Rich and myself, but this is not something all Atheists believe in. Ideally everyone, believer or non, would use mutual respect and personal dignity as a foundation … but the rules that come with religion do not allow for it, and the lack of rules that come with being an Atheist do not require it… so we are left with a wide range of right and wrong in our world.

The insinuation that only believers can hold seemingly irrational beliefs is possibly the most ridiculous of all. Dismissing the existence of God does not mean that you will not fall victim to the paranormal. I know many Atheists who claim to be “Agnostic” towards ghosts… and I also know some who absolutely believe in aliens. Sometimes if this topic comes up in a discussion group Atheists will start to turn on each other, stating that you cannot believe in the things just as ridiculous as God and still call yourself an Atheist… they are wrong. In fact , as long as God is not a factor you can believe the world is flat and still be a perfectly fine Atheist.

So when confronted with questions about what an Atheist does or does not do, try to make it clear that the better question would be, “since you don’t follow a religious belief system, what do you use to guide yourself through life?”. There are no commandments that Atheists abide by and so each one of us must speak for ourselves. At the end of the day there is no right or wrong way to live your life as an Atheist. The only thing that you need is a lack of belief in God, everything else is optional.

2 thoughts on “Not all Atheists are created equal…”