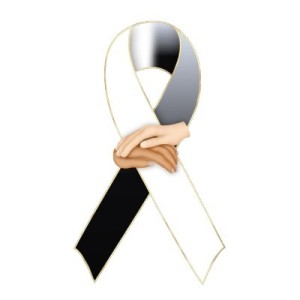 It started with a video from BuzzFeed and spiraled into an anger fueled bullying session where I was ganged up on for not being racist. I was stunned when I saw the original post come up in my news feed. I don’t collect friends on Facebook so the people I interact with are typically people I know well. I met the OP (we will call her “T” going forward and each participating person has been assigned an initial as well) at the beginning of the year in a general Pittsburgh group. We’ve spent time together at a local park as we have children who are only  months apart in age. I never felt that we had much in common, but I didn’t know the extent of it until a few days ago. 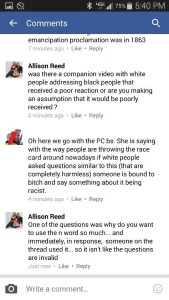 I have plenty of outlets in which to discuss my views on religion, politics and other hot topics- so when it comes to using my personal face book account I don’t typically make waves, especially when it comes to my local mommy friends. I always say that unless it is something that could potentially harm my child I am willing to turn the other cheek and this blatant display of racism was more than enough to make me speak up. I see bigoted views being spewed by adults as dangerous to our youth and it is one of the things I refuse to let slide. Now I am going to include screen shots of exactly how the conversation went down, I apologize in advance for the incredibly offensive meme they used as well as the racial slurs, generalizations and inaccurate stereotypes- these do not in any way represent my views and these people have since been removed from my life. 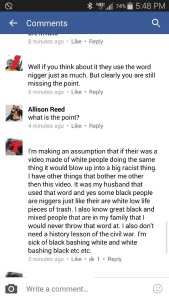 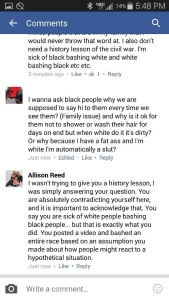 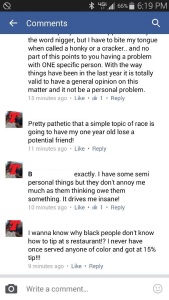 By the time I noticed that T posted the video three comments had already been made. When I saw that one of the comments was “Niggers are always pulling the race card” I absolutely had to watch the video and find out what all of the fuss was about. The video 24 Questions Black People Have For White People included some questions that were clearly in jest (why do you always make such horrible decisions in horror movies?) and others were very serious (“Why does talking about race make you feel so uncomfortable?” ). They made valid points concerning black stereotypes- as I would soon learn many of the questions posed in the video pertained to the people I was talking to and  fit perfectly with the conversation that was about to take place. 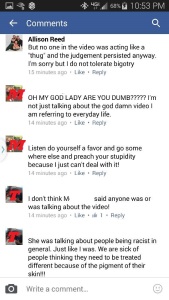 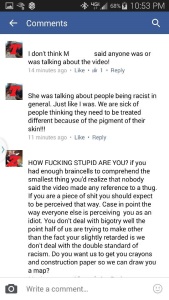 Before we get into the blood and guts of my terribly uncomfortable Facebook conversation I want to point out what all of this started with. While you scroll through the images and read the conversation it will be easy to forget that every hateful word is based on nothing more than an assumption. T saw the video and decided that if there were to be a companion video of “24 questions white people have for black people” that it would “blow up into a big racist thing”. By the end of the conversation I was being told over and over that the video in the OP had nothing to do with the issue at hand, which leads me to believe they may not have even watched the clip. Nevertheless, to use a hypothetical situation to show how an entire race would react to confrontation is racist in itself and probably not the best way to make the point that you aren’t a bigot.

Once the conversation started to roll I could tell I was dealing with a deeper level of racist than I originally thought. Though I knew T’s husband P (the one who used the N word at the beginning) had issues I didn’t realize that T was right beside him on it. I find it worse that she kept insisting she was not racist, that she doesn’t see people by the color of their skin, that she is sick of black bashing and white bashing but then over and over made terrible comments… I really couldn’t believe what I was reading. First she said that African Americans need to “get over” slavery and start acting like decent human beings. She asked why black people think she should say “hi” when she sees them and that if she could ask 24 questions one would be why they don’t have to wash their hair for days on end or why they never have to tip at a restaurant. During all of this her friends B and J were backing her up- when I pointed out that she was continuously contradicting herself and that making generalizations about an entire race is dangerous, one of the friends actually said “I didn’t see her bash a race I saw her speak the truth”. I attempted to step away at that point because I was feeling physically ill over the comments and it was clear that they were not going to be persuaded to see the error in their own thought process. Just when I thought I had said goodbye to T I received a notification that another of her friends had joined the conversation and this was when it turned into a bullying session fueled by racism and hate. 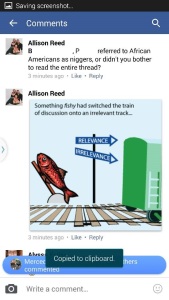 Suddenly the conversation was a blurred mess using skin pigmentation and race interchangeably, saying that this “racial shit needs to end” and calling me “retarded”, uneducated… it seems her friend Z was under the impression that I was black because he asked T “Can black people be basic bitches” (because being a “basic bitch” is a white stereotype) to which T responded “she’s not black. Idk why she’s even getting so bent out of shape!!”. Well in case anyone reading this is curious why this Caucasian woman was so upset it is because this behavior is DESPICABLE! Witnessing jokes about the deaths of innocent African Americans, seeing someone refer to their own relatives as their “colored family”, having “Black Lives Matter” be brushed off as if it is a passing fad… these are just a few of the things that outrage me.

I thought perhaps they were just going to continue among themselves making irrelevant personal attacks. This is something I can ignore. If a man who has to hide behind his screen wants to call me names, have it sir, no skin off my back… but then I saw it, a meme I won’t soon forget. An image of a white man spraying a black child with a hose with the text “Go be a nigger somewhere else”… this made my blood boil. Her friends began posting the N word over and over and T took it upon herself to point out that I was the only person bothered by the use of this word. I replied to her with “Well, I guess I’m the only one who isn’t a nasty bigot”. 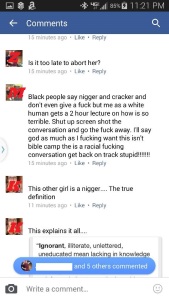 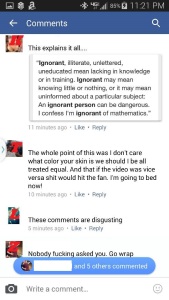 The conversation finally ended when her family saw the post, W is T’s aunt, and she is an African American woman. How unfortunate that she had to find out through Facebook what her family really thinks about people of a different race. I cannot imagine what it felt like to see all of that unfold. I can only hope that by seeing the pain her words caused her family T will reevaluate her personal agenda. She will see that black lives do matter and that expressing hatred towards others is not simply exercising your right to free speech but making a potentially dangerous and live altering choice. At one point Z said that he feels bad for my child having to be raised by me, well I feel the same for their children. Growing up in a family who hates is dangerous for a young child. Telling them that God created us all equal and then speaking of an entire race as if they are second class citizens is confusing, harmful and sets the child up to a future where they lack a basic understanding of civil rights and inability to empathize with the challenges others may face. Rich and I plan to raise Arabella to show people the respect they deserve and to celebrate our differences rather than use them as tools of oppression. I hope that things work out between T and her family- but only time will tell if the wounds of racism can fully heal.

One thought on “The wounds of racism”