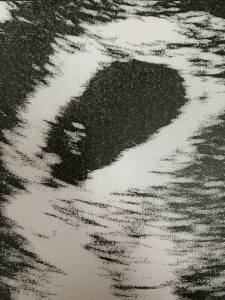 A few weeks ago I wrote a post called “Life Finds a Way”  it was about how we had just found out we were pregnant for the 2nd time. I included the ultrasound picture and took the same stance as with the “A Uterus from Nothing” series… that yes, this baby was a miracle, but not a miracle of God. Well I figured that I had plenty of time to post and I was super busy with work, family and other activities so still it sits in my draft folder… and now it will not be published.  This is because I lost my baby. I went in for a check up and learned that our baby had died.

I will never forget the look on the technician’s face when she said “I am sorry but I do not see a heartbeat” I started to weep… I wept as they assured me it was nothing I did… I wept as they said it was nature’s way of handling something that wasn’t right… I wept as they handed me a pamphlet explaining what a D&C is and I wept as I signed the papers consenting to an “abortion”.

I haven’t had the procedure yet, that is scheduled for Tuesday. So here I sit with my baby inside of me and no way to help it. I think that is the part that is scaring me the most, that the baby is still here. My tummy was starting to pop and I still look/feel pregnant… but my baby is not alive. As a mother I feel like  I have one main job, to protect my children… and this time I couldn’t do it. My body was supposed to keep baby safe, nourish it, allow it to grow in a warm safe environment… but this time it didn’t work out.

We were not trying to get pregnant. If you read my previous blog series you know that I do not naturally ovulate and used fertility treatments to conceive Arabella. This pregnancy was a shock, but a good one, a welcome one… it was like my body finally got it right after all these years and I was truly amazed…. but somewhere between seeing the baby on the ultrasound screen September 29th and having the screen turned away from me on October 28th my baby died and I will never know why.

I have been running through all the different scenarios in my head. One major standout moment was on October 26th when I had my first grand-mal seizure in 7 years (I have Epilepsy but had only been having petit-mal seizures thanks to the aid of a VNS implant and medication). My OB assures me that the seizure did not cause the miscarriage but more likely the miscarriage caused the seizure. Apparently the fetus was measuring smaller than the yolk sack, and there was something about how my uterus had tipped backwards since the previous visit I really don’t know what it all means, just that the doctor was insistent that the seizure was not responsible… I almost wish it was because even though there still wouldn’t have been anything we could have done i’d at least have an answer… but I don’t and I never will.

One thing that I found very disturbing occurred right after they told us there was no heartbeat. Suddenly my baby stopped being referred to as a baby/fetus and became “the tissue”.  “I will go in and extract the tissue” were words that cut me like a knife. It was as if I was just supposed to forget that this was a part of me, with it’s own developing organs, it’s own skin, it’s own heartbeat. Now it was “the tissue” this just made me weep even harder. I understand that they want you to agree to the procedure and that if they actually said “we are going to scrape out your baby, throw it away and pretend none of this ever happened” no one could bear to go through with it… but that was how it felt when they said it to me and that is what is eating at me right this very moment. Perhaps I will feel differently on Tuesday after it is all said and done. This is just the raw emotions and honest words of a mother trying to comprehend a terrible loss.

So until then I will just continue to hold my daughter close, find strength in Rich,, and accept the support of all of my wonderful friends and family members. Whatever it is you may believe in there is no right answer for how to cope with this… so send me your positive thoughts, your well wishes and even your prayers… lord knows I need them all.