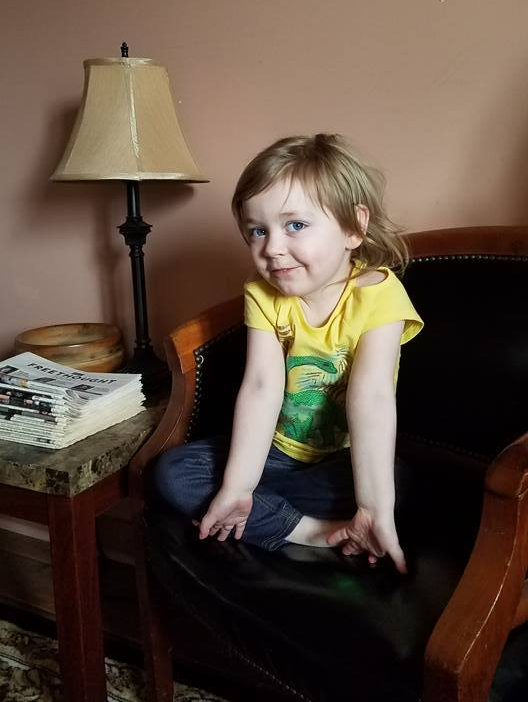 The other day I snapped a picture of my three year old daughter Arabella sitting in our office. It has been a joke between me and my husband that his little collection of  Freethought Today newspapers makes it look like our office is actually an FFRF waiting room. Well I tweeted out the picture and the description and one comment I received really stood out to me.

“Hmmm. Something the religious might do; expose their children to only one way of thinking & the literature supporting that. Sounds like indoctrination, to me.”

I was surprised to see this response because I felt that it was clear my post was meant as a joke. Then I started thinking about  the idea that simply exposing Arabella to non-religious texts would be the same as indoctrination through daily teachings from a holy book. Even if Arabella was able to fully understand the content I hardly think “FFRF defeats Gov. Abbott over Capitol nativity display” compares to “I am the Lord your God, you shall have no other Gods before me”.  If anything the FFRF text would be beneficial as it provided insight into the legal system and the constitution of the United States. Even taking Arabella to an FFRF convention or making her a “member” wouldn’t compare to the relationship between a church and it’s followers. Clearly the comment was non-sense and yet the concept is something non-believers are often confronted with when the topic of secular parenting comes up.

Our society assumes that since many people were/are raised with religion that a lack of religion leaves a void to be filled. I simply don’t see it this way. People have asked me many times how I will raise Arabella in an Atheist family and I find the question to be ridiculous. I just don’t believe that someone is taught to be an Atheist, but more that they are taught to follow God. People are not born with knowledge of a higher power so there isn’t anything to undo. Just like a Christian family would grow up skipping over all of history and traditions of Muslims, our secular family functions each day just like everyone else, except no restrictions from God. 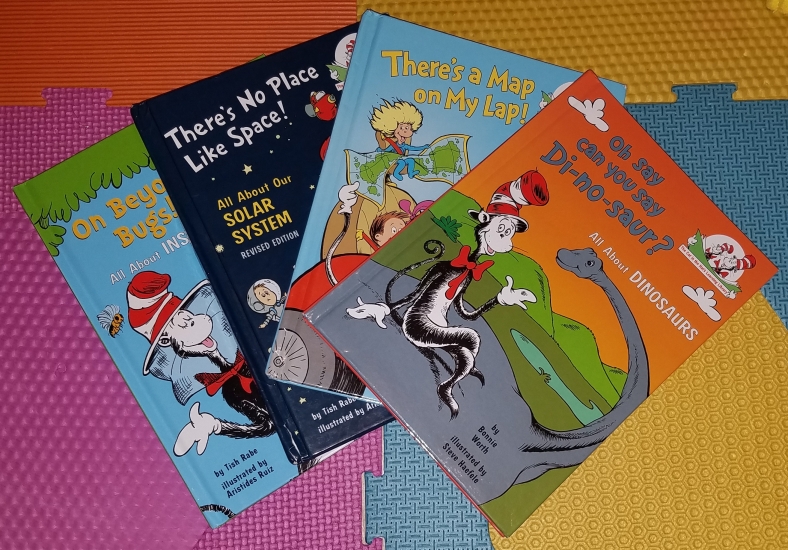 Instead of nightly prayers we have nightly books, right now we read and discuss bugs, planets, maps and dinosaurs. Instead of a crucifix she is learning about a chrysalis… and guess what, she sleeps soundly through the night. As the twitter post above shows it was suggested that as Atheists we could be exposing our daughter to just one way of thinking, but that isn’t the case in our household. Rich and I have a huge library of books covering nearly every perspective you could want. Though she may be years away from comparing the Purpose Driven Life and The Life Driven Purpose we also have a range of children’s books. Right there on her bedroom bookshelf sit I Found a Dead Bird, The Book of Myths and The Golden Book of God and I am happy to read all of them to her. 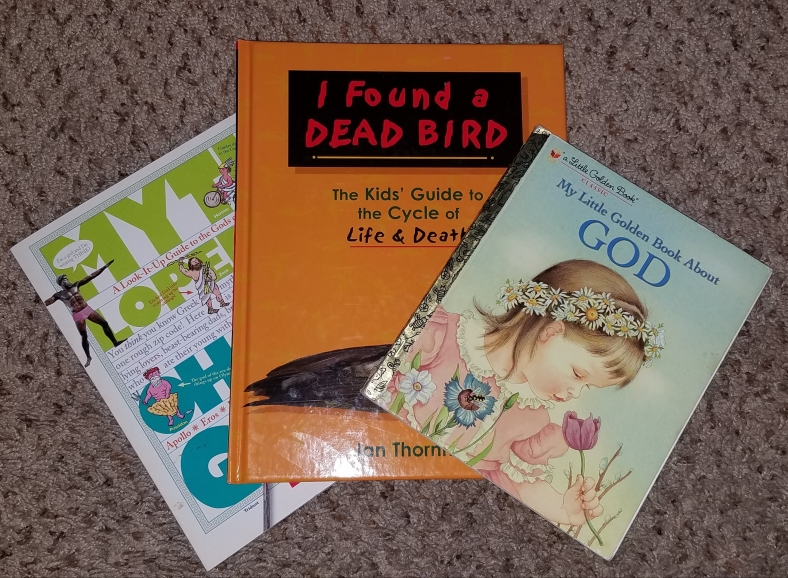 See unlike children raised in religious families Arabella will have the chance to openly explore what various belief systems exist and why people find them to be true. We can hope that by teaching her critical thinking skills she will be able to understand the flaws that come with organized religions. At the same time I will not ever fault her for exploring and will gladly help her research any topic she finds interesting. I have no doubt that if she has a bunch of Christian friends that she will eventually ask if she can go to a youth group meeting. The answer will be yes as I do not believe in sheltering children from religion. I would simply use it as a chance to discuss the logic behind why we do not believe in God so that she can approach it knowing it is based on theory and not fact.

One of my favorite things about living a secular life is there are no limitations on what interests I can hold and what activities I can enjoy. I am thankful to be able to speak for myself, to treat people as I wish to be treated and to learn the natural consequence of life choices.  As Arabella gets older I look forward to watching her enjoy this freedom as well. I believe that secular parenting has an extra level of responsibility because unlike believers that can write everything off as “God’s word” or “God’s will”, you are the one that is providing the knowledge as well as the skills to use it.  Having the opportunity to teach my child kindness, love, dignity and respect without adding in God’s piece of the pie is a true honor for this mom.

11 thoughts on “A Chrysalis Instead of a Crucifix…”